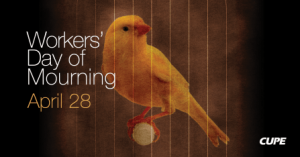 April 28, 2022 marks the third Workers’ Day of Mourning since the start of the COVID-19pandemic. 40 years ago, CUPE members created this day to remember workers who lost their lives on the job and to inspire others to advocate to prevent further tragedies.

The Ford government is proposing changes to HCCSSs (formerly known as LHINS) that may see thousands of women lose decent paying jobs, oversight of services handed to corporations these women currently oversee, and a deterioration of working conditions in home care that will further decrease care standards

April 28, 2022 marks the third Workers’ Day of Mourning since the start of the COVID-19 pandemic. 40 years ago, CUPE members created this day to remember workers who lost their lives on the job and to inspire others to advocate to prevent further tragedies.

Just because it’s a cliché doesn’t mean this really isn’t the most important provincial election of our time. The first election since COVID-19 is a monumental opportunity for workers and communities to kick the Ford Conservatives out and finally build the Ontario we deserve.

As CUPE Ontario, we are going to do everything in our power to defeat Doug Ford. But it’s not going to happen without each and every one of us working together.

May 1, or May Day, is the day that working people celebrate the gains they have won over the years and commit to fighting for a better future for everyone. It’s also just 1 month before the June 2 provincial election.

Join CUPE members, and ten of thousands of workers from across the province as we take action and call for better  public services, higher wages, making the wealthy pay their fair share, strengthening workers’ rights and fighting inequality and the climate emergency.

CUPE Ontario is working closely with other unions and community groups through the Ontario Federation of Labour, to organize actions in cities across the province, as well as a rally right in Doug Ford’s backyard at 2pm at Queen’s Park in Toronto.

Unions are Back with a Brand New Edition! 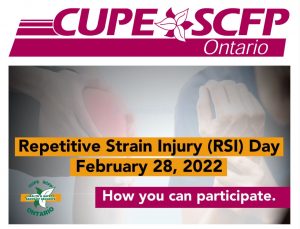 Every year on the last day of February, the occupational health and safety community comes together to raise awareness on Repetitive Strain Injuries, also called musculoskeletal disorders (MSDs).